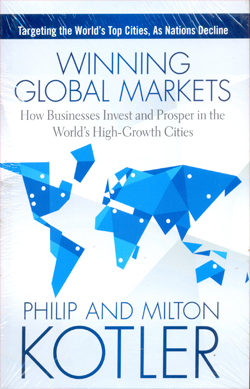 We are facing a new generation of marketing challenges, different from the past and with a still uncertain global economic outlook. What we do know for certain, as born out in the data, is that global city regions in the developing world will dominate market economics and be a fundamental source of company growth and prosperity. Developed city regions like New York, Paris, and Tokyo, will still play a large role because of their high per capita GDP and their still great store of capital and intellectual and management assets. But the new global organization of business will have to meld these diverging worlds. This book will address these issues in detail and strategic insight. In little more than 10 years, the epicenter of the consuming and the marketing of all companies will have shifted from developed countries and cities to developing city-regions. In 2025, only three of the top 25 largest cities in the world will be in the U.S. -- New York, Los Angeles and Chicago. If we turn to the 23 Megacities of 10 million and over population, with the highest number of middle income households, McKInsey estimates that only 7 of these Megacities will be in developing countries. The remaining 16 will be in developing regions.